People who Inspire: John Robinson on a journey of hope 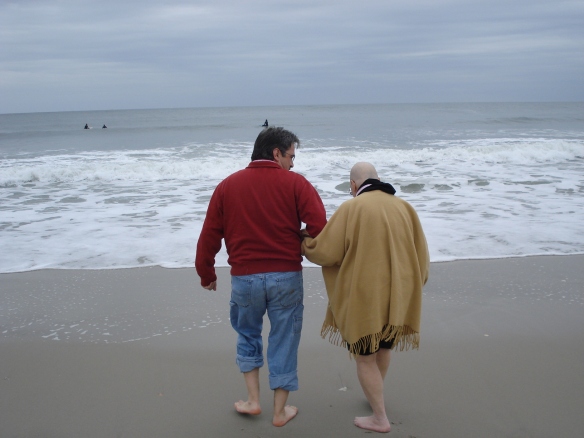 John Robinson was a registered nurse working in a skilled nursing facility in Massachusetts when something happened that would change his life and the direction of his career.

“There was a patient who had no idea he was dying. His family did, but they were in denial and they weren’t there. He said to me one afternoon, ‘I’m not ready to die today.’ After my shift, I stayed with him and held his hand and prayed,” he said.

John found himself doing the same for other patients. At about the same time, his wife Bobbi’s mother was diagnosed with lung cancer. He commented, “She told us some end of life things she was experiencing.” That’s when he knew he needed to become a hospice nurse.

His journey of the heart led him to the Southwestern Pennsylvania, where Bobbi’s mother lived and where hospice nursing opportunities were abundant.

“As a hospice nurse, I develop a trust and rapport with patients and their families. It’s a holistic approach. It’s pain control. It’s physical, emotional and spiritual. And it makes that journey so much easier to walk. There’s nothing in nursing that can compare,” John said.

And yet, there was still more that he wanted to do.

“Bobbi and I opened a personal care home in our home. Part of the therapy we offered was granting a wish or two or three to the patient. After a couple of years, a sagging economy led us to have to close our doors. I returned to work as a nurse. Bobbi and I wanted to continue granting wishes to adults with life-limiting illnesses, so on August 22, 2007, we officially started a non-profit – Unity, A Journey of Hope,” he remarked.

The first wish came from Carmel, whose breast cancer had spread to her lungs. John said, “She hadn’t been to the ocean in years. All she wanted was to dip her toes in the Atlantic Ocean.” And so they made the journey to Atlantic City, NJ and together, she and John walked through the sand and into the water. Carmel was overjoyed. She passed away three months later.

When Bruce Springsteen was coming to town to perform, Pam, also with breast cancer, had just one wish – to meet him. Bobbi worked the phone for two months, speaking with his office until the wish was secured. On the night of the concert in Pittsburgh, according to John, the group had their seats “in the nosebleed section”.

But that wouldn’t last for long.

John explained, “We were moved up close to the stage. Before Bruce went on, he came over and gave Pam a hug. He signed his ‘Countin’ On A Miracle’ CD for her and he gave her all of his attention for probably three or four minutes.” It was more than enough to make Pam’s wish come true.

With 160 wishes granted so far, John said getting a Pittsburgh Penguins player to the home of Michael, who had Osteosarcoma, was the toughest wish of all to grant and nothing short of a miracle.

“Bobbi called and arranged for a player to come and meet him at his home. I told Michael that the next day a player would be there and he was so happy,” John said.

And then the phone rang. They were told by the organization that a player could not come, after all.

“We were distraught. We didn’t know anyone there. I gave it to God. Bobbi wasn’t giving up and went on to the nhl.com site and saw the Penguins player name of Chris Kunitz. She clicked on it and to her surprise, up came his personal contact information. It was 10:30 at night,” he said.

Bobbi called and Mrs. Kunitz answered. They had a good conversation and two days later Chris was at Michael’s home and spent one hour talking with him.

John remarked, “There was no way his personal contact information should have showed up on the website and the NHL security confirmed that. God was with us.”

The wishes Unity, A Journey of Hope receive are as varied as the people who make them, including Megan’s wish to swim with the dolphins, Thomas’s wish (a former WWII B-24 pilot) to fly one more time, and Grace’s wish to have a family reunion and to meet a former Pittsburgh Pirates player.

John’s touching and emotional experiences in hospice care are captured in his book, “On my Journey Home”, which also serves as a practical guide to what should be done and what to expect at the end of life. “The purpose of the book is to open a conversation. To say the things that need to be said,” he commented.

Over the past 13 years, John said he’s cared for more than 1,600 hospice patients and their families. For his dedication, he was awarded the Northeast Hospice Caregiver Award by Amedisys Hospice two years ago. He was one of four nurses to win the prestigious award out of 17,000 employees.

‘You held my hand when I needed support….You comforted me with a much needed hug…You kissed me on the cheek and I felt special…You shared a smile when all seemed lost…You watched me change and never once made me feel different…I will love you forever with all my heart for walking with me, hand in hand, side by side, tear for tear, on my journey home.’

“People who Inspire” is a new series to shine a spotlight on people who have done extraordinary things. If you have experienced a great adventure, survived a life-threatening illness or trauma, overcome obstacles in achieving a goal, or have made an impact on someone’s life, I’d love to hear from you to share your story. Email me at marymotivates@gmail.com so that we can inspire others to be unstoppable in the pursuit of their goals.