People Who Inspire: Maria Connell inspiring with Down Syndrome 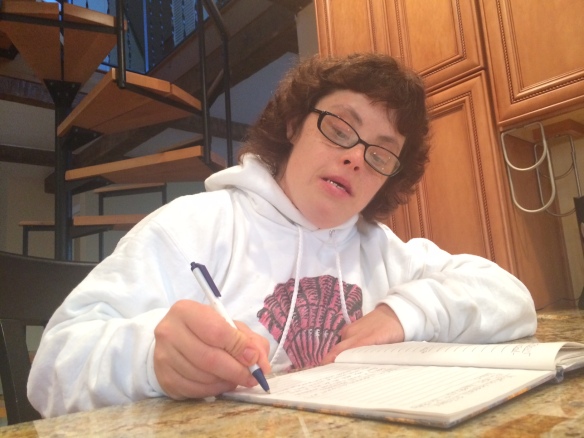 When Maria Connell pens a poem, it has a purpose – to inspire. The 33 year old is a writer, speaker, and kindergarten teacher’s aide who knows how to overcome challenges.

Born with Down Syndrome, she writes poems that become a special part of birthdays, holidays, funerals and other occasions for family and friends. Her insight is unspoiled and pure, giving the recipients of her poems a meaningful and lasting keepsake. This is her gift.

It’s not only the words, but her voice that she lends to these special occasions, sometimes speaking in front of hundreds of people.

At the Nantucket wedding of her cousin Chris and his new wife Molly, she recited her poem, which read in part, “I am with both of you on the beautiful island…the sun is up and the seagulls are calling…As you embark on your lifelong journey…now I can finally say Molly, welcome to the Connell family.

Fourteen years ago, Maria’s cousin, Colleen, gave her a journal as a birthday present. Since then, her poems are written in journals that fill her room with words that come from the heart – a heart that is overflowing with love.

On May 15, 2014 that love was boundless as Marie described it as “the greatest day of my life.” That’s when her brother Jimmy and his wife had their first baby and she became an aunt. To welcome their child into the family, she wrote in a poem, “We have been waiting for you to enter into our world and our lives and into our family…We are going to open our arms and embrace you – and you – will have great parents that will love and prepare you for life – With love, Maria.”

The Impact of Maria’s Education

She has lived out those words with her own parents, Mike and Stephanie. Both retired teachers, they have provided Maria with love and preparation for her life.

Stephanie commented, “Education has been important since day one. We took Maria to Dr. Mary Coleman, a Down Syndrome researcher, in Washington DC who recommended early intervention education.

As a result, at six weeks, a teacher was coming to the house weekly and we followed up on her lessons. When Maria was 18 months old, she attended Fayette County Child Development every day. And at five years of age, she attended Intermediate Unit support classes.”

In third 3rd grade, Maria was enrolled at St. John the Baptist Regional School where she was included in regular classrooms and with learning support, learned to read and write. She had this same support as she went on to attend Geibel Catholic Jr/Sr High School.

Her mother remarked, “Maria is self-motivated to learn. Through high school, Mike and I would exchange plan notes with teachers. We sat with her every night as she did her homework and never had to drag her to do the work. She always wanted to do it.”

Ann Behary, the music teacher, recommended that Maria be placed in music class. She put her in the marching band with cymbals. She went on band trips and participated in high school musicals. Maria and Wade Wohler, another student with Down Syndrome, attended proms and Christmas dances together. High school was a rich and full experience for her.

A Network of Support

Stephanie remarked, “Maria has always been around people who have the right attitude.”

Some of those people include family friends like Leo Lowney, who was the high school guidance counselor and cross country coach. He walked with Maria every day to encourage her to be active. Bob Bailor, a retired professional baseball player and coach, was recently inducted into the Fayette County Sports Hall of Fame. At the induction Maria attended with her parents, Bob asked her to stand and told the audience, “My wife couldn’t be with me, but I have my #1 fan here.”

This circle of support has enabled Maria to do the unexpected. Stephanie remarked, “One day, family friend, Gene Cavalier who taught Driver’s Education called and said, ‘I want Maria to learn about safety on the road.’ He taught her. Even though she doesn’t drive, she understands it.

It’s been this extended support of family, friends and the community of Connellsville, PA that has helped her to be successful.”

Maria completed a work-study program in high school helping with the kindergarten class at Conn-Area Catholic School. Her mother said, “One day following graduation, the principal, Sister Catherine Meinert, called and said, “We have a job for Maria if she is interested.”

She was definitely interested. Maria has spent the past 13 years serving in the role of teacher’s aide, taking local public transportation to work every day. She remarked, “I like it because it reminds me of when I was in kindergarten. I clean up after play time. I get the homework folders ready, get coats, and pack book bags with homework.”

And she inspires her students too.

Maria has a journal filled with poems written for Conn-Area kindergarten students for every occasion including the first day of school and one to commemorate the birthday of Mary, the mother of Jesus.

On September 8, 2009 she wrote, “This is a day to honor everything that Mary has done in her life…she wants all of us to grow, learn, change…we should follow her wonderful example of life. Mary gave all of us one of her special gift and that is her son Jesus.”

While each of the students brings great meaning to her life, she remarked, “Last year, I had a little girl. She would cling to me. She didn’t want to do things with her class. She just wanted to stay with me so I would encourage her to try things. Every time she did something on her own, I would say “good job”. Now, the little girl is independent.”

The openness to try new things and to not give up has always been part of Maria’s life. She took Acro and jazz dance classes at Kids and Company from the time she was four until she was 18 years old. So health and fitness are no exception.

Eleven years ago on August 10, when her family returned from vacation, Stephanie said it was time to make a change – one that would impact the health of the entire family.

Maria was carrying extra weight, and as a result, was having a hard time walking and breathing. “On that day, we switched to a diet low in carbs and we had protein, vegetable and salad for supper. Maria also started going to Weight Watchers,” Stephanie said.

Now, she also takes Tae Bo (kickboxing), uses an exercise bike, takes physical therapy for an arthritic knee, and walks one mile each day. The result has been a total loss of 80 pounds for Maria. She is maintaining a weight 65 pounds lighter than she was eleven years ago. “Every year on August 10, we celebrate her success,” she said.

When I interviewed Maria, she and her parents were getting ready to visit her cousin, Carly, at the university she attends to celebrate her birthday. Maria was writing her a poem and shared what she had written so far…

And for MaryMotivates.com readers, she shared this advice. “Sometimes life is not fair. Just go with it. Have faith.”

Maria has an abundant network of family and friends who love and support her. But when you spend time with her, you realize that it’s really Maria who provides the support – lifting people up from wherever they are in life.