People Who Inspire: Ethan Keedy on never giving up

Ethan Keedy gives back – even when he could have chosen to give up instead. The 21 year old college junior and pizza shop entrepreneur is on a mission to serve and to make his father proud.

“When I was 15 years old, my dad worked the 3:00 p.m. to 11:00 p.m. shift at Cherry Tree Nursing Center as a CNA (certified nurse assistant). I didn’t get to see him most nights, so I started going with him to work. I was an activities volunteer for the 4:00 p.m. bingo and I spent the rest of the evening going room to room to sit with residents.

He explained, “I was never good at athletics. He and my twin brother, Nick, would play ball in the yard or go hunting. I saw volunteering at the nursing home as a way to give back and to spend time with my dad,” he said.

It was time well spent with the nursing home residents too. Ethan commented, “I sat, talked, and played games with the elderly who were going through the lowest point in their lives. A lot of them were well off in their life time. Now they needed someone to be there.”

When one of those residents, Emily, complained that she was cold, Ethan crocheted her a blanket. It’s a talent he picked up when he was just 10 years old. “Our neighbor Flo taught us how to crochet. When you live in the middle of nowhere and you’re bored, you pick up a lot,” he said.

Another nursing home resident was Anna, whose life was coming to an end at 103 years old. “She wouldn’t eat for any one. Four different people tried to feed her pudding. I talked with her and told her it was homemade apple pie. I wanted to take her out of the reality that she was in a nursing home to make her feel that she was back home eating apple pie. She ate the three pudding cups and after that she was bubbly and smiling, acting like someone who was years younger,” he remarked.

The 30 minute rides back and forth to the nursing home offered quality time with Ethan and his dad. He commented, “We talked about work and the people there. If we were going to have a relationship, this was it,” he remarked.

In the attempt to connect with his dad, Ethan developed a love of giving back. In his junior year of high school, he had amassed 2,000 hours of community service. One of the projects he initiated was a Walk-a-Thon to benefit East Park, a historic piece of Connellsville’s landscape in need of renovation. “It was my goal to bring movie nights back to the park.

Supported by his family, including his parents and brother, Nick, as well as the community, Ethan raised $1,200 – enough to get the concession stand at East Park up and running. A $250 Community Service award he earned through a non-profit that year was used to buy tee shirts for the walkers.

Ethan commented, “The Walk-a-Thon was the first project I did with my dad. It was the first time I heard him say he’s proud of me. And it was one of the last good times I had with him.”

One month later, Ethan’s father, who was battling depression and substance abuse, left home. “My parents split up. From October through March we didn’t hear from him,” he said. In March of 2010, the family learned he had committed suicide. Ethan and his brother, Nick, were 17 years old.

By then, Ethan had made community service a priority in his life and was serving as a student representative on the Connellsville Area School Board and the Fayette Cultural Trust. He remarked, “I questioned why I should continue doing anything. I thought, ‘Why bother?’”

Times were about to get tougher.

“My mom pushed herself into work. Nick was diagnosed with cancer. I had a car accident. My mom got sick and had an operation. My whole life came crashing down at once. I wanted to give up.

A choice to make

Then I realized working harder and working to make my dad proud was a better way to go. I had a responsibility to step up and help my mom. I had to be strong for her and Nicholas.”

Ethan said he initially questioned whether they should have reached out to his dad during those months he was away from them. As time went on, that answer became clearer. “He needed to seek help, clean up and then come back into our life. These were decisions that he made,” he said.

The choice Ethan made was to continue on in the service roles he had and he added more, including becoming the youngest member of the Connellsville Lion’s Club. He was elected president of his senior class; earned The Challenge Program, Inc. Student of the Year award; and graduated from high school.

Today, Ethan is a junior at Seton Hill University majoring in history with a minor in business. Last summer, at the age of 20, he and Nick became entrepreneurs when they opened Pizza Louie’s in Connellsville, PA. 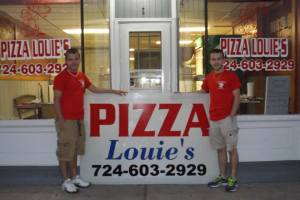 The full time student said his past work in a pizza shop trained him for this unexpected opportunity. The money he saved since his first job at the age of 16 made it possible.

How does Ethan manage the demands of college and a business? “No sleep and lots of help from family members,” he said. Good time management skills he acquired through years of school and service activities help too.

“Since opening the business, my mom has been a huge supporter. Even while working her two jobs she has been there for me and my brother through everything. She has become this amazing mother who can beat all the odds. I could not have done any of this without her by my side,” he said.

Ethan said he takes pride in knowing that through Pizza Louie’s he can serve the community. “We use only the best ingredients and our generous portions can feed a family,” he said. During a recent month-long promotion, one dollar from the sale of every large pizza sold benefited the American Cancer Society. He said his plans are to support his hometown’s city projects and to aid local charities through the business as well.

“I know if my dad was still here he would be beside me cooking and he would be proud,” he said.

Goals for the future

Ethan’s future goals are big and they have one common theme – serving others.

“My father and I used to watch the History Channel. He was into politics and that got me interested too. We would talk about what is happening; why it’s happening; and what should be done. So I’m taking political and criminal justice classes. I’m working to understand law and where the political system is broken.

Someday I hope to sit on Connellsville City Council and to run for Pennsylvania state representative. I want to hear everyone’s concerns and work together. Accepting help and ideas is what makes a good politician. In business, every decision I make has input from everyone,” he said. Ethan’s ultimate goal – one he has had since he was 11 years old – is to run for the office of President of the United States in 2032.

It’s a goal his father was aware of, but for everything else that has happened in Ethan’s life in the last few years, he said, “It was hard that he wasn’t there. I wonder, what would he think? You yearn for that ‘I’m proud of you, keep up the good work.’ That’s why I’m writing a book, “Never Give Up”.

For those left behind from suicide, they don’t understand why a loved one took their own life. The answer isn’t always there. The best we can do is to stay strong and make them proud.”

While doing research for a college project, Ethan said, “I discovered that for every suicide there is the potential for four more suicides in the family.”

But he said it doesn’t have to be that way. There are resources to help and we can all make a difference.

“If you see a kid who just got picked on in class, don’t laugh at them. Go up to them and ask do you want to go to the game? Do you want to do homework together? These small moves make a huge difference. A simple hello could save a life.

The person you see is going through a tough time and they are not to blame. They are in need of help – and kindness. If people thought about how the decisions they make impact others, they might make a better choice,” he said.

Ethan’s goal is to have his book, “Never Give Up” finished by March, 2016 – the five year anniversary of his father’s passing. “It tells the story of my life and working through this hardship. How do you go on to be president? You do it with the support of family, friends, and the community. And you do it through faith. I pray every day.

I have learned to understand that I should not blame my dad for what for what happened, but forgive him and work every day at trying to make him proud. I hope to be able to stop someone else from making the same decision he made,” he said.

The message Ethan wants to express in the book is, “Live life the way it is or make it something worth living.” They are words he wrote and lives by.

It’s what he does to make his father proud.